Women Solidarity Network statement on the events of Hajour

Urgent appeal to save Hajour At a time when Yemeni citizens became optimistic regarding the prospects of the peace agreement and the effort exerted by the international community to get Yemen out of the humanitarian crisis, we are witnessing a spreading and intensification of the conflict in the areas not covered by the Stockholm peace agreement. As the agreement eased from the intensity of the conflict in Hodeidah, Houthis re-oriented their military operations focusing on th 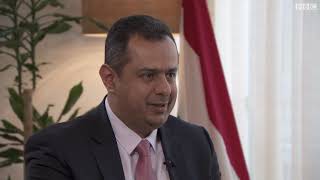 As part of the series of meetings with MPs held by the Yemeni Ambassador to the UK. HE Ambassador Yassin Saeed Noman met with Member of Parliament for Chesterfield Mr. Toby Perkins This meeting came after a briefing letter sent early this month by the the embassy to parliament to update members on the ongoing obstacles facing the implementation of the Stockholm Agreement. His Excellency also explained that the Houthi millitias have launched a new offensive in Hajour district,

BBC Crew visited Yemen front lines with Yemeni Minister of Information HE Mr. Mommar Al-Eryani In the visit BBC crew interviews people living in Midi district in North of Yemen. Most of the residents have fled their homes due to the landmines planted by the Houthis Salah says her grandson was killed in a Houthi drone attack. 8 people from her tribe died in that night. Listen to her story & other voices from Yemen today at: https://soundcloud.com/mariabyrne/in-yemen-with-t

British Foreign Secretary Jeremy Hunt (R) walks with his Yemeni counterpart Khaled al-Yamani (C) in government-held Aden on March 3, 2019. (AFP) British Foreign Secretary Jeremy Hunt held talks with his Yemeni counterpart in the temporary capital Aden on Sunday, in the first visit by a western foreign minister to the war-torn country in years. “I am here because this is really the last chance for peace,” Hunt said from Aden, in a video uploaded to his Twitter account. Hunt he

Press release issued by the Ministry of Foreign Affairs

press release issued by the Ministry of Foreign Affairs